I am honored to be a new member of Lon Strickler’s paranormal investigation team,representing Western Oregon/Willamette Valley, and the central coast.

If you’re not familiar with Lon, check out his books on amazon.com, and his blog. Oh, and his podcast! 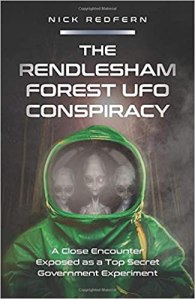 NIck Redfern was on Coast to Coast last night, discussing his latest book about the Rendlesham UFO case. I haven’t read the book yet, so this is not a review of the book. But by now, we all know the premise of the book: that Redfern believes what those witnesses saw that night was not an extraterrestrial UFO, but a man made object. Not just that, but an intentional mind control experiment, created by humans.

Blurb from the C2C site:

Detailing several elements which informed this hypothesis, Redfern revealed that there exists a decades-long history of “secret experiments and highly classified facilities all located less than 11 miles of Rendlesham Forest.” Additionally, he noted a now-declassified 1964 experiment that occurred in a different British forest which saw soldiers surreptitiously given LSD in order to gauge their response to the drug under those conditions. He coupled this with insights about projects aimed at developing “sophisticated holographic technology” which can produce imagery that looks incredibly real.

Years ago, when I first heard about this case, my first thought was: “mind control, government ops, etc.” It seemed obvious to me, and I didn’t even know about the proximity of installations nearby that played around with such things as mind control and LSD MK ULTRA type experiments. The plot thickens.

I’ve been saying for decades that much of the UFO phenomena, including abductions, missing time and other high weirdness are the scenarios created by humans. But here’s the thing: at the same time, those humans know damn well about the reality of “the others” out there, including various ETs and other non-human entities, terrestrial and non. Manipulating and tapping into these energies is what these humans do. (I include many crop circles in this category.)

Remember this book by by Helmut Lammer Ph.D. and Marion Lammer? It came out twenty years ago.

Who knows what really happened at Rendlesham? I don’t, and, as I’ve said, I haven’t read Nick’s book yet. I’m not commenting on the book itself, but the idea of the Renlesham event being a manipulation by humans is very probable. Accepting this theory as possible, let alone true, does not negate the existence of the other.

But as George Knapp  (last night’s C2C host) remarked last night, it’s almost a lot scarier that our own would perform such experiments on us than  the existence of aliens. (I’ve been saying the same thing for years as well.)

I wrote this item on my Orange Orb Blog on blogger in 2017:

Nick Redfern; A Contactee or a Victim of Mind-Control? | Mysterious Universe

A Contactee or a Victim of Mind-Control? | Mysterious Universe: While some may disagree, Angelucci’s tale bears all the hallmarks of someone taking a long and winding trip of the definitively chemical kind and after taking a drink. Angelucci stated that the previously innocuous restaurant was now “transformed into a cozy retreat on some radiant star system.” Needless to say, this is not the experience that most people report upon taking a gulp or several of a drink in the average diner. “Added beauty and meaning” were suddenly given to all-things around Angelucci, as his radically-transformed mind begins to excitedly navigate previously uncharted realms. He heard captivating music that prompted him to comment: “No sound could be so enchanting unless played by some skilled musician.” (Redfern, Mysterious Universe)

Redfern suggests that some contactees, such as Angelucci, were not literally in contact with aliens from space, but victims of mind control by our own. I have no doubt. This doesn’t negate aliens, or non-human entities milling about, but I agree with Nick that mind control experiments were responsible for some of the UFO experiences reported. MILABS (military abductions) staged alien-UFO scenarios. This theory doesn’t make a lot of researchers happy. But, it’s worth considering.

There are those researchers and eye-witnesses (or perhaps “victims” would be a much better term) who believe that alien abductions have nothing to do with the activities of real-life extraterrestrials, but are, in reality, the result of clandestine work undertaken by the U.S. military.
So the theory goes, the military uses the alien abduction motif as a carefully-camouflaged cover to allow for the continued testing of new technologies, such as mind-altering and mind-controlling drugs, and sophisticated hypnotic techniques on unwitting and innocent citizens.

Is it possible that now, after all this time, the idea of MILABS is getting some serious consideration on a more open level among ufologists? I hope so. About time. I don’t know if MILABS explains abductions or not, if ET is still involved in some ways, or what, but I do know that the subject has been on the fringe of the fringe and many have not wanted to look at MILABS in a serious way. Maybe things are changing. Leah Haley’s recent statements concerning her own abduction experiences have startled a few into rethinking things…
_______

I think UFO researchers — those that reject or just don’t go there – need to consider in a serious way, that in many cases, humans are unethically, illegally and cruelly involved in putting their sisters and brothers through all kinds of hell (see also Greg Bishop’s Project Beta)  in the guise of the whole UFO/alien theme.

A Silver Sphere,Tall Whites on the Brain

We did see a silver sphere shaped object above a field out on Lorane highway decades ago. It was still light but late afternoon, early evening. About fifty feet above a large grassy field (no animals around)  we saw a silver or chrome colored round object that was stationary, and rotating slowly. A white beam of light was shining down from underneath the object. I remember my husband and I both slowed down, watched it for a few moments. We both felt uncomfortable and agreed we didn’t like this, and, “let’s get out of here.”

Not sure why but I’ve had tall whites on my mind today.

This blog post was originally posted at UFO Mystic May 16, 2010. UFO Mystic is now gone, sad to say. I enjoyed writing for them.

I attended the McMinnville, Oregon UFO conference this weekend; very good, as usual. All the speakers were interesting, at the very least, and I’ll write more on that in the days to come. James Clarkson, Travis Walton, and Colin Andrews were the speakers.

Two odd things happened during Colin Andrew’s presentation. (Of which I will be commenting a lot about; it’s so much to process and I’m not there yet.)

As usual, Peter Davenport, the MC, and conference coordinator Tim Hills both asked the audience at every presentation to turn off their cell phones. And as usual, there were a few people who didn’t seem to hear that request, or, care. Those people were sitting right behind us.

So Colin Andrews is giving a fantastic and deeply moving presentation; and these bozos behind us are talking, fooling around with their camera equipment, and having their cell phones going off. At one point, Interstellar Housewife’s Deirdre O’Lavery turns around and says in a succinct, quiet and to the point voice: “Will you shut the fuck up, we’re trying to listen to this.” They did, in fact, they looked like deer caught in the headlights and were pretty quiet after that.

Aside from the very few cell phones that went off periodically throughout the presentation it was pretty quiet. Then when Colin Andrews arrived at the point in his talk about government military intelligence type forces involved in crop circle research, (including the matter of fact statement uttered a few times by Andrews that there were agents in the room) along with the intelligence of the crop circles/makers themselves, several cell phones went off at the same time. It was a cacophony of cell phone tunes. Very eerie.

Earlier in the presentation, Andrews played recordings taken inside crop circles, and one taken in a tree. I had an immediate physical feeling while hearing one sound; it was under the skin, as if I were vibrating. During one of these recordings I literally could feel myself vibrating. I felt as if I were about to leave my body, I was having the same feeling I have when I have an OOBE. Jim (my husband) didn’t have that same physical feeling, but he did have a strong emotional response:

“The sound gave me the impression there’s something underlying, primordial — some sound like something you’ve heard all the time, something that’s been there sublimely all along.” he said.

Finally, the wasp. Right before leaving for Colin’s presentation, a yellow jacket got into our hotel room. It was crawling around on the inside of the window which was open a bit. The wasp was big and scary, at least to me, since all bugs are big and scary, no matter what their size. Jim killed it. (The windows in the Hotel Oregon don’t open very far, just a few inches, and he would have preferred to have removed the insect alive, but it wasn’t possible.) Then we left for Colin’s presentation.