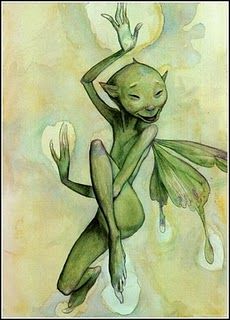 This was originally published on Binnall of America’s website on my bi-weekly Trickster’s Realm column on 12/26/05 and reposted on my Saucer Sightings blog, which is an archive of my own UFO sightings and encounters. The article has been edited for this post.
————————————

About twelve years ago I was visiting friends who were house sitting for a mutual friend of ours. The home owner traveled to Mexico frequently on business; he owned a store in Oregon, and brought back folk art, books, and ceramics to sell in his store.


As I was wandering around the home looking at his extensive book collection, I noticed a large cape hanging on the wall. This cape was very unusual. It wasn’t made of any type of cloth, but seemed waxy and stiff, with little “horns” or large thick thorns protruding from it. The cape was a darkish lime green color. While the cape wasn’t made from any cloth like material and didn’t look like it’d be comfortable to wear — certainly not practical — it was obvious this was a cape indented to be worn.


I touched the cape,rubbing my fingers on its smooth surface, being careful of course to avoid those white yellowish stud things that were clearly sharp enough to really hurt if touched. I appreciated the cape for its history (whatever that may be, since I didn’t have a clue) and was drawn to it for some reason — I couldn’t stop running my hands down the cool smooth surface. Even while I was attracted to the cape, I felt uncomfortable around it at the same time; I didn’t like it. It was big and ugly, a sickish green color, and subconsciously, it annoyed me. It just seemed out of place.


I had planned on staying to visit with my friends but suddenly felt extremely tired. It was the middle of the afternoon and a beautiful day, but I had to get home — I was just so suddenly exhausted. Fortunately I didn’t live far, just a couple of miles. Yet riding my bike home on that beautiful day was so damn exhausting. I was losing focus; as if I were coming down with the flu yet I didn’t feel sick, as in ill, just … unexplainably tired.


As soon as I got home I headed right for the bed, flopping down and grateful to finally make it home. Almost immediately I began to leave my body; one of those OBE states that happen to me spontaneously and that I haven’t been able to control since I was a child. I wasn’t asleep, but not awake exactly, yet I was consciousness of the bedroom, the open window, the sun coming through the screen and other mundane things. At the same time I was paralyzed but felt myself rapidly leaving my body. I could hear the sound of whistles and flutes coming from a distance away, then getting closer. These musical sounds were not coming from outside (like a neighbors house or stereo) but from whatever place my astral body was going towards…


The next thing I knew I was in a deep sleep. I remember visions of chanting and signing, the flutes and whistles again, the cape draped around someone, a man. I couldn’t see his face. We were somewhere in the desert, or some rural country area. It was night and the stars were numerous and very close to the ground; I could touch them if I just reached out far enough. This was no dream; it was as real as this moment now, sitting here typing this. The memory of the desert ground; so hard, with dusty brown bits of soft dust, the coolish night air, the smells of earth and night, the music of flutes, bells, chanting. I was next to this man in a cape, his cape, face unseen, doing a jerky kind of wheeling, turning movement beneath the stars.


When I woke up, it was dark, and I felt as if I’d been poisoned. Not actually physically sick but I mean, I felt as if someone had given me some kind of sleeping pill or drugged me in some way. It took me a very long time to get back to reality. I felt sluggish and my tongue felt thick. This feeling lasted for a couple of days.


A day or two later I found out that this cape was from Mexico and had belonged to a Shaman. It was used in special ceremonies. I hadn’t mentioned this to my friend; it was the other way around. He had told me, quite spontaneously, that he was told that the cape was used for magical purposes that involved whistles and dancing, and was performed out in the desert, away from towns and especially the Church. How or why our friend managed to get this cape I don’t know, except that was a collector of what we call folk art and folk religious items. To those that participated in these dances and ceremonies, those are just labels used by outsiders.


This incident happened about twenty-five years ago or so. I was sitting on the bed reading. I wasn’t in bed; it was still early. I was simply on top of the covers, dressed, reading my book. My husband was in the other room. I had what I call a “mind post card,” — it’s an experience that happens every so often, where the picture, absolutely vivid 3-D full color image, is “inserted” into my mind with a sharp suddenness. It’s as if someone had literally slid a postcard or a slide of an image (and very often a moving image) into my head. I don’t know where it comes from, or why it happens. Usually it’s a telepathic thing: a preview of something that occurs later that day, or within a day or two. This time however, it wasn’t a prediction of something; it was a “visit.”


This “mind post card” was of a dirty lime-green being with warts or bony stubby nubs all over his body. He had two little stubs or buttons at the top of his forehead; not horns or antlers, but the suggestion of such. I just “knew” that this being was male. It wasn’t human, but it wasn’t animal. It was maybe closer to human than not, but definitely not human. He was sitting in profile to me, squatting down actually. We were out in the desert — or, he was. At this point it doesn’t matter; it was as if I was transported, or his whole world superimposed itself onto mine. I was there with him/it. We had entered each other’s realm of existence. Somehow I had been transported to his desert, and his desert had moved closer to my world.


He “saw” me and turned his head to look at me. He slowly grinned at me, but this was no happy smiley expression! He was a nasty piece of work! It was clear he knew exactly how I was feeling, and thought it very funny in a sadistic way. He was also a little irritated I was there — or, he was here — that we were in each other’s worlds.


I was so damn startled that I screamed. With that scream he popped out (or I was snapped back to my own reality.) And again he seemed irritated, it as if he wanted me to stick around so he could toy with me. He was mad I had screamed and ruined the fun. Such a temporary and special event gone in a flash.


To this day I remember that experience with a chill. I don’t associate any UFO experience or connection with this (although, with all the high strangeness that often accompanies UFOs who knows) and I wouldn’t say it was alien. Not alien from another planet; not even alien from this earth. But I had the sense it very much belonged here and was of the earth, and it belonged here, if such judgments can be made on these things, more than humans. I had the feeling it was indigenous to the earth.

Had an interesting dream the other night, involving a family of another country and culture (true; I really know these people but not listing those details here) but, in this dream, involving music, dance and drumming, among other things, the following:

I’m in the room with this family, and lots of other people as well. Up on a little platform, is a long table with a dark haired (long dark hair) woman (around 40? maybe 50) who is reading from a deck. I assume it’s a tarot deck, but can’t get close enough to see. The backs of the cards are beautiful; greens and blues, mermaids.

I can’t hear the woman too well; can’t tell if it’s a traditional tarot deck or an oracle deck. I notice the woman doesn’t have any clients; she just starts reading out loud to no one. Is she giving the whole room a reading? Reading to someone invisible? I still can’t see the deck up close. I want to, because it’s so beautiful, from the backs. I’m all about mermaids! But I’m confused as to the nature of the reading. Also, I realize I don’t much like her. I don’t like her style; she seems almost rude, and very loud. Not my approach.

Yet after awhile, I realize what she’s saying is more important than the way she’s saying it. And, with a sudden awareness, I just know that she’s more than human, if she’s really human at all. She’s an archangel! She’s a mermaid archangel.

When I understand this, I feel better. I’m awed, actually. And I realize her reading to the room is for anyone out here who cares to listen. It makes sense now. It’s not important that I don’t dig her style; it’s not about that.
I want this deck!