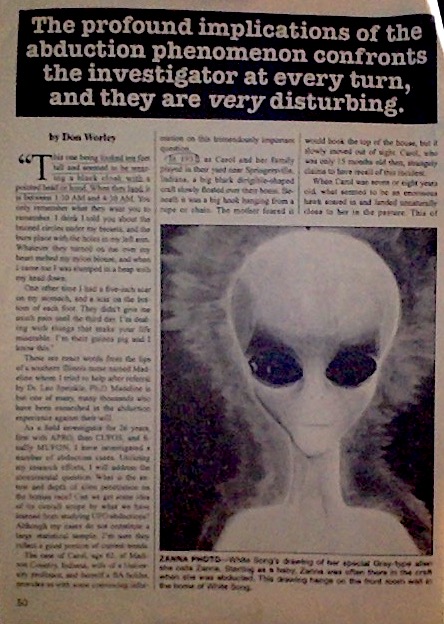 I found this article by researcher Don Worley that I clipped from (I think) UFO Magazine.  (Strange World Abductees.) I neglected to label the article with date or source. The illustration is marked 1991 Richard Runnels, so possibly the article is from 1991.

Worley’s article is a collection of experiences by UFO witnesses and abductees.

One experience Worley relates  has echoes of things I’ve experienced. Abductee “Carol” age 62 at the time of the article, has had many encounters. An early encounter in 1931 in Indiana:

“…a big black dirigible-shaped craft slowly floated over their home. Beneath it was a big hook hanging from a rope or chain.”

The object “slowly moved out of sight” above their roof.

The following is a blog post from my Saucer Sightings blog (now defunct, but you can still read it on-line):

A recurring dream I had as a young child. Timeframe 1959, early 1960s. Los Angeles, California.  I had lots of dreams connected to alien, non-human beings, which included being floated out through walls and doors and placed in a large tree at night. There I’d sit/wait/watch the starry night sky…

One recurring dream motif I remember has me standing outside, at night, on our block. Usually at the corner (near that large tree, that was easily three or four stories tall) which was at the corner. The tree belonged to our neighbor; we were the second house down from the corner. Waiting, outside, at night, sometimes I was with others, usually children. And up in the sky, not much higher than that tree, came the “ship.” Sometimes it was a giant basket, like the ones seen with hot air balloons. But no giant balloon; just the basket and something above that, like a dome thing, some kind of machine. Other times, instead of a basket, it was an over sized bathtub. Inside the baskets, or bathtubs, were one or two people, adults, in uniforms.

I had this dream many times. Always the same: at night, alone or sometimes with others, mainly children, in front of, or near, our house. Waiting. Waiting for what I thought of as my friends — these people in uniforms, in their floating bathtubs or baskets, were always pleased to see us. They took us away on purpose. This was a regular thing.

Another experience Carol had when she was eight concerns “an enormous hawk” :

…what seemed to be an enormous hawk soared in and landed unnaturally close to her in the pasture. Thisof course is contrary to the natural instincts of a hawk. She stood there looking at it and remembers nothing more. She doesn’t remember walking back to the house or the hawk flying away. [Worley]

I had an experience when I was very young; I must have been about three or four. This also appeared on my Saucer Sightings blog:

The Open Ceiling and The Eagle:

There was a silver suited alien on the patio at this house on Corning Street, . . but before that:

Before that, . . . I’m lying on my back in bed. I remember this as vividly as if it happened this morning; I also remember this as a “dream” but it was so damn real, I told myself afterwards it was a dream, because it doesn’t make sense that it could be real.

I’m in bed, in the middle of the bed, which is huge, though in “reality” my childhood bed wasn’t huge. Flat on my back. I’m both excited — exhilarated — but also a bit scared, not understanding what’s going on. There’s some confusion; my father is here, and I don’t understand why. He doesn’t live with us and he wouldn’t be here at night. My father, mother and grandmother are standing in the doorway; they can’t come in for some reason. They’re watching, but something prevents them from coming closer.  There’s a lot of activity, but I’m in the middle of my bed, which is huge,I’m kind of spread eagled, I can’t move. I have a sense of being tied up, but I don’t see anything that’s tying me, but something is preventing me from moving.I feel both fantastic and a little disoriented. Lots of bright, bright lights; everything is lit up so white. I look up at the ceiling, and it opens up, opening from the center, two halves moving back to expose the nighttime sky, which is beautiful, full of inky blue and shimmering stars. I think this is a pretty neat trick. A giant eagle flies down from above; the eagle is so large, it fills the sky, fills the open ceiling. It comes down straight at me. I don’t like this too much. I’m not exactly frightened, but it’s not comfortable. The eagle takes me up into a silver disk type thing. That’s all I remember…

One last account from the article, involving a “red-orange” object Carol saw in 1964:

…Carol had dressed to go to a social function. Suddenly, a. large brilliant red-orange object began to hover across the street casting an eerie glow over everything. The neighbors and Carol’s daughter became very excited: however, they would still not believe Carol’s story – and refused to look at the object. [Worley]

Worley doesn’t mention if the object was an orb shaped UFO or not. The orange orb I saw in the early 1980s was large, though I don’t recall it casting a glow — just lit from within. If the object Carol saw was an orb, this is record of an early orange orb, and a large one at that.

Fortean explorer, UFO and paranormal witness many times over, writer, wrote for UFO Magazine, and many on line publications. Articles have appeared in Darklore Journal, many of Tim Beckley's Global Communications books. Manage several blogs dedicated to UFO and paranormal research, including Bigfoot and Mothman.